Outer Banks, NC: We are studying flooding owing to ocean waves and surge, groundwater, and precipitation using observations of the water levels in the surface aquifer that we have been collecting at the US Army Corps of Engineers Field Research Facility near Duck, NC since September 2014. The measurements are being used to develop a simplified model for the increase in groundwater levels owing to rainfall, as well as the propagation of groundwater bulges resulting from infiltration of ocean and sound water during storms. 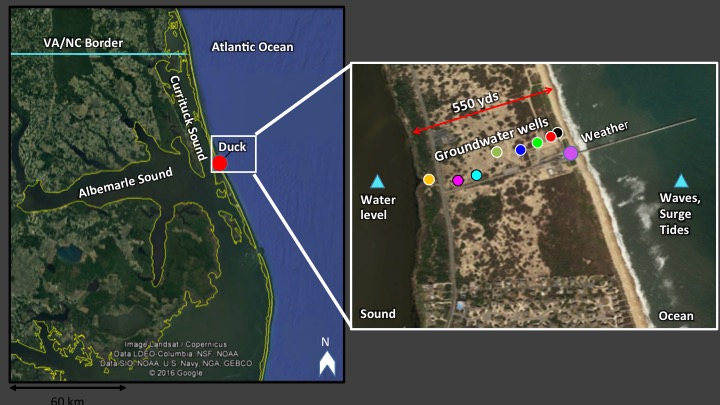 (Left) Map of the northeastern coast of North Carolina where we are studying flooding (red circle near Duck, NC). (Right) Zoomed-in aerial view of the study area at the FRF showing our array of groundwater wells (colored circles spanning the barrier island), as well as the observations being collected by the facility (including waves, surge, water levels, and rainfall and wind).